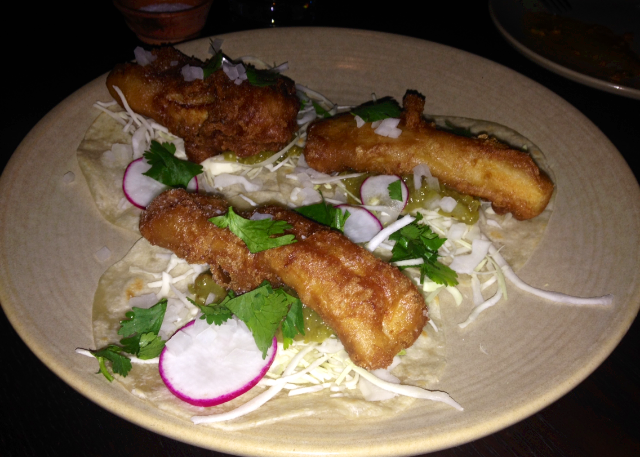 The Empellon team (Al Pastor, Cocina, Taqueria) now has three locations in New York City. The newest taco bar, called Empellon Al Pastor, just opened in October on the corner of St. Marks and Avenue A. Empellon Cocina serves modern Mexican and is also in the East Village. Tonight I was at their original restaurant, Empellon Taqueria, in the West Village where they specialize in tacos.

Let me tell you my prego girlfriend, Michelle, had a blast. She used to love tapas food and wine, but since becoming pregnant she can’t drink, eat cheese, cured meat, or raw seafood. So she went cray cray ordering three different kinds of tacos plus reordering another plate of fish tacos again. Damn ~ #PregoGoneWildOverTacos

Here is what I enjoyed.  We tried three different kinds of tacos and two appetizers. I must say these were the best fish tacos I ever had. Even better than tacos I had in Mexico. But my two favorite dishes from dinner were the Shrimp (shrimp chorizo, nugget potato, serrano salsa) and theDiver Scallop (cucumber, tomatillo, mezcal) from the appetizer menu .  The scallops were raw so she Michelle cheated a little bit. hehe 🙂

I highly recommend that you order these three dishes the next time you visit Empellon in the West Village.

P.S. — I recently visited Empellon Cocina for dinner and it was a completely different experience than the one I had at Empellon Taqueria. My patrolling report is coming soon so stay tuned! 🙂